Working on subquery optimizations, got an idea how to speed up join execution a little. Read on.

The important property is that access to t3 is independent of access to t2. MySQL’s nested loops join algorithm will run this as in this swimlane diagram: 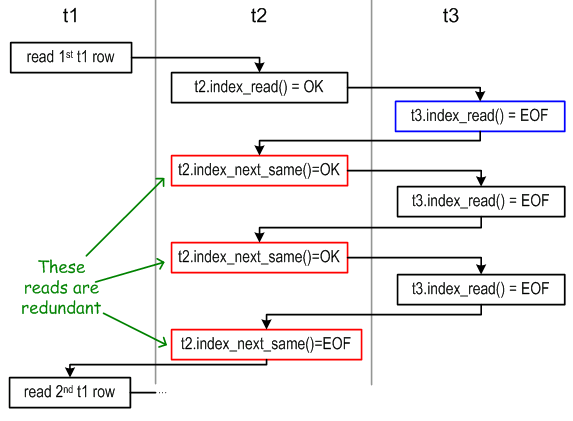 Here we assume that

As soon as we make first index lookup in table t3 (the one with blue border), we see that there will be no matching row combinations for this row of t1. Nevertheless, MySQL executioner will proceed to examine different rows in table t2 (marked with red border). This is redundant and can be easily avoided.

The executioner part is easy: just maked the nested-loops join code to “jump back” in the cases like the illustrated. If we don’t find a match and table access/selection condition does not depend on the preceding table(s), then go back to the last table that the table access depends on. I don’t have the ready term for this, the working name is “short-cutting”.

The optimizer part is (as usual) more complicated. One way is to take the easy route: let the join optimizer (the part of code that chooses the join order) remain unaware of the short-cutting. Once the join order is produced, set up the executioner to perform short-cutting where appopriate.

The bad part is that join optimizer doesn’t account for short-cutting when comparing costs of various join orders, which may lead it to choose non-optimal join orders. However, taking short-cutting into account won’t be easy:

At the moment the easy route seems like the way to go.

View all posts by spetrunia2